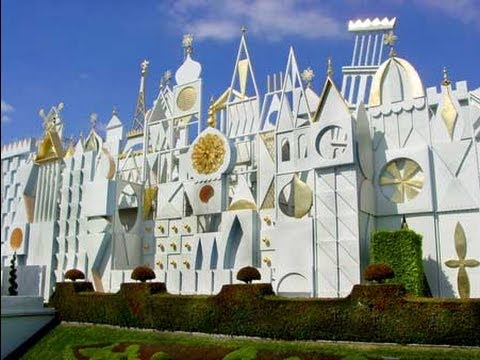 My sister’s boyfriend works for ESPN. Since Disney is their parent company, he gets passes to Disneyland a few times a year. Oh, darn. Mom, Dad, and I used them over the summer. We just went to walk around, though did go on a few rides. I asked to go on Small World. Dad grumbled, but obliged.

I obviously can’t get into a boat. There is one with a lift, but it was being used at the time. It was 4:55. As the clock ticked, I wondered how in the world the employees did it. That thing would drive me crazy. Eight hours!?

Our boat came before five. As we floated along, listening to that song, which I was extremely annoyed to have in my head when I went to sleep hours later, I started noticing things. As all of the dolls sang, their “jaws” would clack, the outfits looked a little tired, and when you looked over the boat’s railing you saw all the mechanics beneath the dolls.

I was a tad disappointed seeing that, as I said, that was my favorite ride as a kid. There was “Disney Magic” at work. But as an adult, you become wise to it. Wouldn’t it be nice to keep that childlike innocence all of our lives?